by John DiBartolomeo at Competition Plus 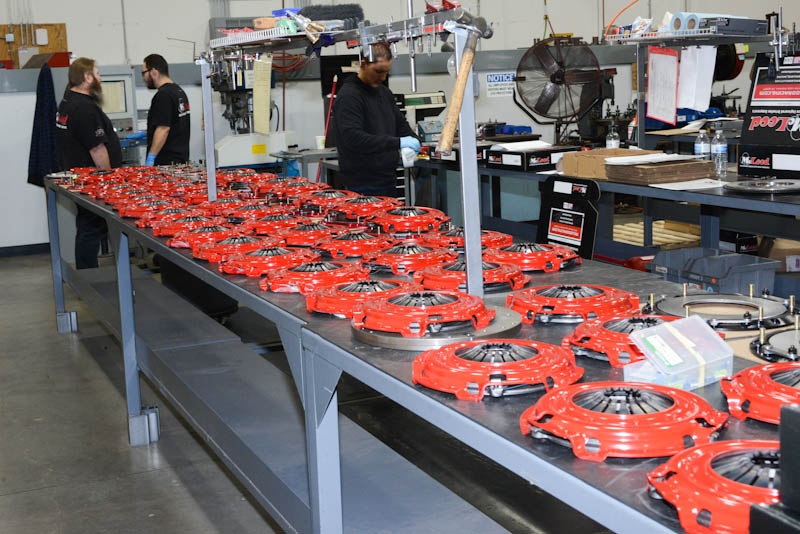 After service to his country in the Army, Roberts went to work with Bill Hays and his successful Hays Clutches company. After the purchase of Hays Clutches by new owners and the elimination of Roberts’ position in 1968, Roberts continued his rise within the industry as the sales manager for Weber Speed Equipment, then owned by Harry Weber.

With his knowledge of clutches, Roberts branched out on his own, starting the clutch company that has become synonymous within the industry, McLeod Clutches. Where though did the name McLeod come from?

“I had watched Bill Hays build his company and then effectively sell his name,” said Roberts in an interview years ago. “If I was going to do that and knowing that one day I might sell the company, I didn’t want my name on it. In looking through the phone book, I noticed that ‘Mc’ had its own heading and the name certainly was somewhat controversial. I had actually gone to school with a girl named McLeod and no one could pronounce her name, so I chose that. In fact during the time, I used to play a lot of Hearts, the card game, and the first card let out was clubs, so I used that as part of the logo that’s still used today.”

And so it was that on January 4, 1971, Roberts opened the doors in Anaheim, California, of what has become a very successful venture. Now on its 50th anniversary this year, Roberts’ thoughts of one day selling the company looks like a smart move on his part, but not before his clutches became the must-have component for a number of championship race cars. In 1979 alone, 15 out of the 16 qualified Pro Stock cars at the NHRA Winternationals used a McLeod Soft Loc Clutch. To further add to the company’s legacy in the 1980s, Roberts pioneered the use of the RXT/RST double disc clutch, which is still sold and used today as is the Soft Loc design.

Meanwhile on the east coast of the country, Paul Lee was being educated first as an attorney but more importantly, working with Boninfante Clutches first as a consultant and eventually as the company’s CFO.

In 2006, Roberts retired and sold the company to the B&M Group. “However, it really wasn’t a good fit,” says Lee. “I had known about the history of the company, in fact, purchasing from Ben Pilla Speed Shop outside Philadelphia, a McLeod clutch for my first car while I was in high school.

“Red was a long-time customer of Boninfante, purchased raw clutch discs from us, so I got to know Red very well,” added Lee. “Red mentioned to me the possibility the company may be available for sale again. The B&M business model didn’t quite fit well with McLeod and I knew clutches. I had almost literally grown up with the Boninfante family, so clutches were in my bloodline.”

In 2008, Lee purchased McLeod, moving west to California and has rebuilt the McLeod line to once again become a leader in the industry.

“Red was an extremely smart man, an engineer of sorts with a lot of technical knowledge,” says Lee. “His products sold because they were so good. But coming from a business background, I felt we could take it even further. After Red’s initial sale, the company had floundered somewhat. We came in and rebuilt some of the relationships Red had built over the years. Along with some TLC and branding, by 2010, we were back to being profitable.

“I’m an entrepreneur and had wanted my own company,” Lee adds. “This was the perfect opportunity for me because it was not only a struggling business, but because it was a clutch company, which is my background, I knew I could take and bring it back to the prominence it once had in our field. It just was a perfect fit for me.”

Now a noted Funny Car racer starting out with an Alcohol Funny Car on the east coast, Lee’s heart may behind the wheel, but his acumen is certainly with the McLeod company. Speaking of heart, it was also an almost devastating heart attack in late 2016 with significant heart damage which sidelined his racing activities. Much like his drive to build the business, it was his drive to return his health status which today has him back behind the wheel.

“Whenever I go to our new facility or even think about the company itself, I’m proud to be a part of one of the original automotive aftermarket companies still in our industry. Along with companies like Edelbrock, Holley, Hedman Hedders and a couple of others, McLeod has been a pioneer in the industry, thanks to Red. It’s one of the oldest names still going and succeeding today. The Hays name is still going but it’s not what it once was, McLeod is.”

Built on racing, today those numbers have flipped to where 90-percent of the company’s business is in the burgeoning street market. Still though, with Lee’s background in racing, the company maintains racing clutches as part of its line.

In 2019, Lee purchased FTI Performance which has expanded the McLeod line to be a complete drivetrain supplier.