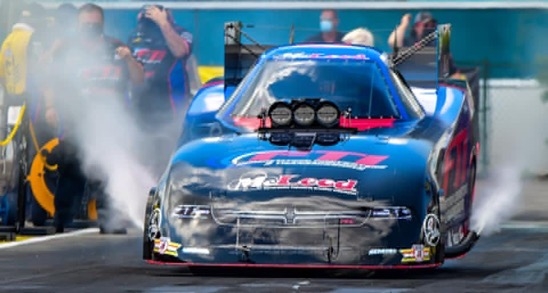 October 29, 2020 (LAS VEGAS, NV) Paul Lee loves Las Vegas and he will love it more when he wins a NHRA Camping World Wally on Sunday. The FTI Performance/McLeod Racing nitro funny car team has achieved many fast runs and great numbers, but they have not sealed the deal with a four-round victory on a Sunday. Lee and the team look at the Dodge World Finals as a chance to upset the Championship chase with a victory of their own.

Paul Lee visits Vegas occasionally to partake in some of the toughest high-stakes poker tournaments. Lee has found a few wins on the poker tables and now wants that win on the drag strip. Crew Chief Jim Oberhofer and the team are primed and ready for an all-in bet this weekend at the Strip.

“I’ve had some success in no limit hold’em poker tournaments over the years, but now it’s time to win at the Strip at Las Vegas Motor Speedway,” says Paul Lee, president and owner of McLeod Racing and FTI Performance. “Racing is sometimes like playing poker; you need some skill and a lot of luck to win.”

With a number one qualifier and a semi-final finish, Paul and Jim Oberhofer believe with a little help from Lady Luck, they can secure a final round win for the 2020 season.

“This year we have been battling with some clutch wear issues that many of the teams that run a 5-disc set up do,” says Paul Lee. “We’ve made some great runs this year but more often than not, we would be on the wrong side of a really close drag race.”

Paul, Jim O, and the boys are ready to take on the final race of what is one of the most unusual competition seasons that anyone has seen. The team is projected to finish in the top 10 and it shows that hard work and dedication that each person on the team contributes.

In addition to McLeod Racing and FTI Performance, the team will be welcoming IT consultants company, Innovative Global Technology Group (IGTG), to the roster.

IGTG is celebrating their 25th year in business with a special anniversary logo which will appear on both Paul’s Funny Car and Clay Millican’s Parts Plus Top Fuel Dragster this weekend.

“Clay and Paul are experts in racing and IGTG is the ‘expert’s expert’ for IT consulting,” says IGTG Managing Partner, Scott Kunau. “At the end of the day when the customer wins with a great solution or expert-level issue resolution, we’ve done our job. We can’t wait to join both teams in Las Vegas and we look forward to celebrating with them in the winner’s circle on Sunday.”

Qualifying begins at the Strip at Las Vegas Speedway on Saturday October 31 and final eliminations begin 10 am on Sunday morning. Be sure to stop by the Global Electronic Technology pit in your costume for some Halloween goodies!