Paul Lee has one of the quickest Funny Cars on the tour; is a win coming soon? 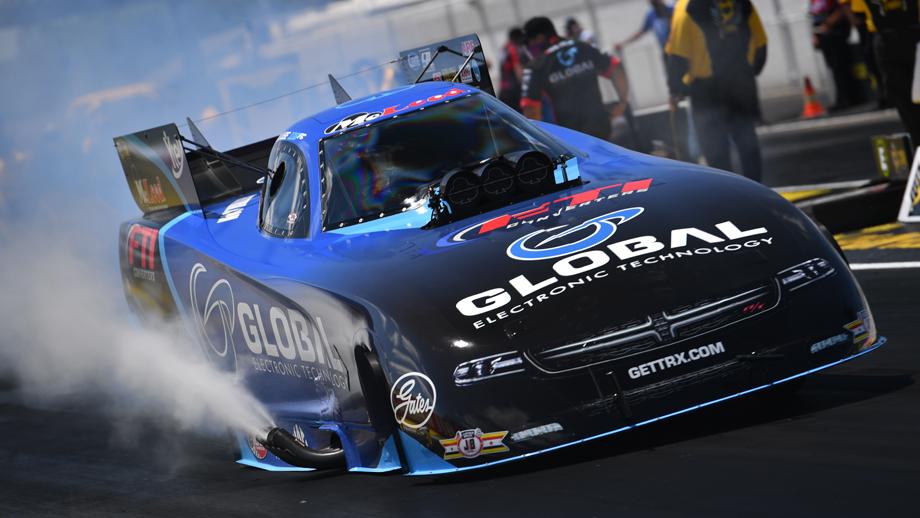 The best run in Funny Car in the three races since the resumption of racing following the pandemic shutdown does not belong to points leader Tommy Johnson Jr. or race winners Matt Hagan or Ron Capps. It belongs instead to Paul Lee and crew chiefs Jim Oberhofer and Donnie Bender, even if in an unofficial capacity.

Even after last evening’s first night qualifying session, the best run in Funny Car in the three races since the resumption of racing following the pandemic shutdown does not belong to points leader Tommy Johnson Jr. or race winners Matt Hagan or Ron Capps. It belongs instead to Paul Lee and crew chiefs Jim Oberhofer and Donnie Bender, even if in an unofficial capacity.

In round one of eliminations at the E3 Spark Plugs NHRA Nationals at Indy in early July, Lee’s Global Electronic Technology entry covered the 1,000-foot course in 3.888 seconds. The only problem was that he clipped the finish line timers, disqualifying the run, but it was still enough to get the attention of the Funny car pits. Only Capps, who ran 3.895 to lead Friday qualifying, and Johnson, who ran 3.896 to beat Capps at the first Indy race, have been close.

“The car has been running great, but it’s really been mishandling,” he said, in a bit of an understatement, as he also took out a timing block at the last race. “We took the car back over to Don Schumacher Racing because it’s a clone of their cars. Rahn Tobler went over the whole steering setup and found where it had been binding and preventing me from turning the wheel when the car was under downforce.”

Lee, like almost everyone, has been affected by the COVID-19 pandemic. Because he has heart disease and also contracted pneumonia two decades ago, he’s been very cautious with his health as those factors could put him at extra risk if he were to catch the coronavirus. In addition to the mandatory temperature checks that all people entering the racetrack must undergo, Lee also checks his crew again in the pit area. He also provided free COVID-19 tests for the employees of his businesses.

On the positive side, Lee’s FTI transmission and McLeod Clutches businesses during the pandemic has skyrocketed.

“People aren’t going to the movies or going on vacations or even going out to dinner in some states; they’re staying at home working on their hobbies, and for a lot of them that means cars. We’ve sold twice as many transmission kits as we did last year, and we still have four months to go.”

Additionally, with the 11-race shortened schedule, Lee will get to race the entire season for the first time; he entered the year expecting only to run 15 of the planned 24 races. He sits 10th in points and would love to remain in the top 10. Throughout his entire career, he’s only finished in the top 10 once, in 2004, when he was racing in Alcohol Funny Car and scored all three of his career national event victories.

Can a first nitro win be far behind?